1. The Alchemist
2. Le Petit Prince
3. Shantaram
4. Chinese Cinderella
5. A Year in the Merde

1. The Alchemist by Paulo Coelho 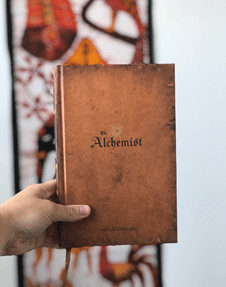 I probably sound like a broken record but I just finished The Alchemist and absolutely loved it! It’s about a shepherd boy who roams Andalusia, Spain with his sheep before venturing to Morocco by boat. He meets many people on his journey; merchants, wizards, lost souls, believers, townsfolk and waiting women who each teach him life lessons. The young boy looks deeply into himself and his surroundings to find answers about hidden dreams and how to reach them. Books like these keep me dreaming about my next ‘viaje’ to Spain, which I’m hoping will be soon

‘Le Petit Prince’ – One of my favourite books in the whole world!

It’s about a child who travels to different planets in the universe to try to understand his own planet, and therefore, himself. A moment that stood out to me the most was when he meets a businessman on a planet who counts the stars. “But for what?” asked the little boy. The man explains that he counts the stars because he owns them, which makes him rich. The boy asked the businessman why does he want to be rich? The answer was; so that the businessman could have the ability to count more stars which would make him even richer. From the boys perspective, adults do many things that are unusual and for not much point at all.

What a read! I read this book a year ago and although it’s got a lot of content, it is STILL one of the best travel books I have ever read.

Shantaram is a biography with its protagonist, Roberts, who escaped in broad daylight from a maximum security prison in Victoria, Australia (true story). Roberts flees to India where he involves himself in all sort of shenanigans; black market, drugs and acts of crime as well as spirituality, love, friendship and the confrontation of death. Although there is no indication whether or not the truth is exaggerated in the book (highly contested debate among readers), to me, it doesn’t matter, as it’s got everything you need for a good read.

This was by far the best book of 2010. It’s a memoir of Adeline’s difficult childhood growing up in Tianjin city. When Adeline’s mother died giving birth to her, Adeline was considered bad luck and suffered abuse from her family and especially from her evil stepmother. Meanwhile, her brothers were constantly showered with gifts and presents. Despite Adeline succeeding academically, it was never enough and could not suppress her need for family approval.

If you haven’t read this book by now, take it with you on your next travels, it honestly will not disappoint.

5. A Year in the Merde by Stephen Clarke

A year in the poop, if the title didn’t give it away, it’s a hilarious book. It’s Stephan Clarke’s account of his innings in France. From his tips on how not to buy a house in the French countryside to surviving French meetings and getting the best out of grumpy waiters, it is a light and humorous read that will brighten anyone’s day.

Now that you have (in my opinion) the 5 best books ever written on travel and adventure, this list can be used for armchair reading whilst you save up for your next trip or taken with you on the road to give you inspiration. It’s my TOP 5, what’s yours?

Sorry, we aren't online at the moment. Leave a message.

We'll get back to you as soon as possible.
Login now

Help us help you better! Feel free to leave us any additional feedback.

How do you rate our support?